skip to main | skip to sidebar

A moment frozen in time 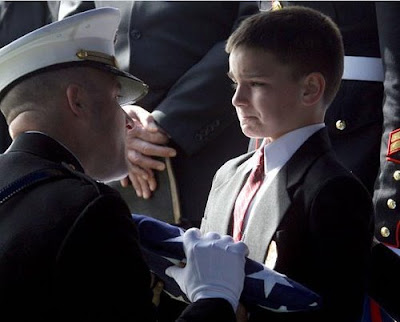 A young boy, maybe 8 or 9 years old. Standing tall, in his best suit, trying oh so hard to be a man at that particular moment. A Marine, in full ceremonial garb, presenting that boy with the flag that had recently draped the boy's father's casket.

The boy is devastated. His whole world has crumpled around him. The man he called "dad" is gone. The man who hugged him, who lifted him up to the sky, laughing, as the boy cried in delight "Daddy!" is no more, and he is far too young to fully understand why this must be so.

The Marine is devastated. He is presenting a memento to a child who can not possibly understand why life as he knows it has been demolished, never to return. The Marine is holding on to his self control with every fiber of his being, when all he wants to do is hug the boy tight and tell him that it's OK to grieve, he doesn't have to be a man at this particular moment, he is free to be a little boy. The Marine has seen combat, he has seen horrible, terrible things. He's held comrades as they bled out on a dusty Afghanistan road, directed fire into hostile locations that he knew held women and children, but he had, reluctantly (dear God how reluctantly) to do it to ensure the safety of his men. He is a hero in every sense of the word, but nothing has prepared him for this.

We (you and I) are devastated. We observe this tableau from a distance. We (or at least I) are horrified at the reality this picture forces us to confront. The picture hits us like a mule kick to the heart. How many of us are willing to hazard our loved ones for freedom?

Make no mistake, what this little boy's father died for was our freedom. The boy is being presented with that flag "On behalf of a grateful nation". Much as his father did, that little boy is paying the price of freedom in full. My not so little anymore boy wants to go into the armed forces where he might very well die. He's willing to chance that for an ideal. I'm willing to let him go in the service of that same ideal. Every signer of the Declaration of Independence was willing to pledge "our Lives, our Fortunes, and our sacred Honor." for this country. Most of them did indeed pay with their fortunes and some with their lives. Can we in the 21st century expect to do less, or are our Lives, our Fortunes and our sacred Honor now worthless?

Today of all days, my heartfelt thanks goes out to all of those men, women and their families whose answer to that question has always been "Hell no!". They are the rock upon which this nation rests.
Posted by Weirddave at 10:47 PM 3 comments:

Click here to read the text of the origional Declaration of Independence.

Now read what this cartoonist came up with here. It's scarily close.

I'm not sure the founders would stand for what we do today. Food for thought.
Posted by Weirddave at 1:39 PM 2 comments:

From the "Irony can be pretty ironic" department

"I am again left to marvel how somebody can rise to a fairly prominent media position with no discernible insight or talent, save for an apparent ability to mix up a vast bowl of word salad very quickly."

"A young Iraqi girl asked for her finger to be inked even though she was too young to vote in this Iraq election. Iraqis voted in Sunday's election as insurgents killed 38 people across the country, unleashing a barrage of mortars intent on disrupting the historic day."

Beautiful.
H/T The Christian Science Monitor
Posted by Weirddave at 10:15 AM 1 comment:

Jesus! Give it a rest!

Bambi can't even speak to a classroom full of sixth graders without a full podium and teleprompter set up, yet the usual idiots are going nuts because Sarah Palin jotted a few notes on her hand before a speech. Great motherfucking Christ, could you get any more pathetic? The left is a joke.
Posted by Weirddave at 11:54 AM No comments:

...By the mid-1980s, the situation in the Colonies had become, from the Americans point of view, intolerable. The founding fathers gathered together, and sent a stern video missive to King George III, clearly stating their dissatisfaction with the status quo. What followed was, of course, the Revolutionary War, culminating in the founding of the United States of America, free forever of England's yoke. For the first time, that video has now been made public.

"We're Americans, that's what we do"

I couldn't have said it better myself. This entry is going to be sparse on comment because I am not able to comment any further than the reality of the corpsman in the video. America stands for something, something wonderful, and our young men and women live that every day, and they put it on the line and in the news for all to see. Watch the video. I have not the ability to enhance reality, and I will not try. Watch the video.

Breaking video from the White House as Brown looks poised for victory in Ma.

Weirddave
Baltimore,
Soviet Republic of Marylandistan
I'm in my late 40s, father of two, husband of one, self employed and generally happy with my life. I have been running my own business since 1998, before that I bounced around several meaningless jobs after graduating from Towson State University with degrees in History and Political Science. For most of my adult life, I was a conservative Democrat, which confused the hell out of people trying to pigeonhole me, but the excesses of the current administration finally drove me to switch my party affiliation to Republican, as I want nothing to do with the abomination Washington is attempting to perpetrate on the American people. My overriding political philosophy is generally libertarian in nature. I remained a Democrat for years mostly out of a sense of nostalgia for my younger, more idealistic (but completely impractical) youth, although as a practical matter, in a one party, closed primary state like Maryland, if you aren't a registered Democrat, nine times out of ten, your vote doesn't matter. Nostalgia or no, the excesses of the Obama administration finally put paid to that.

Get some common sense

Here are links to some of the best professional bloggers and op-ed writers online. You may not always agree with them, I don't, but they always present their case clearly and logically.